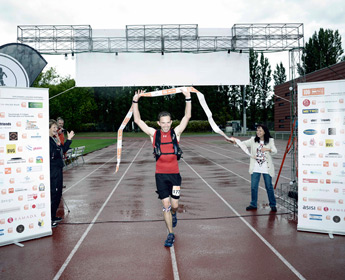 "My fastest days are still ahead of me"

33-year old British ultrarunner Mark Perkins won the third edition of Mauerweglauf in Berlin, a 100 mile race along the territory where the Berlin wall once divided the city into east and west.
He crossed the finish line after 13:05 hours and set a new course record.

We asked him to answer a few question afterwards. The questions for ULTRAMARATHON, the magazine of the German´s Ultrarunners Association, asked Nicolai Popal.

UM: Congratulation Mark Perkins for winning the 100 miles of berlin, what a great job you did!

Mark Perkins: „Thank you! It was a very enjoyable race and I was very fortunate to have a good day on the roads."

UM: Your aim before that race was to run sub 14 hours. Now you finished in 13:05 hours. This is a dramatic improvement for you for the 100 miles! Perhaps you don't know yet how good you can be in ultrarunning?

Mark Perkins: „Well I certainly like to think that my fastest days are still ahead of me! I was very pleased with the time and I definitely think that I can go faster, if I can fit in the training and stay injury free. A year ago even 14 hours would have seemed like a crazy time to me so the last few months have definitely been a pleasant surprise."

UM: Will you have the honour of running for the British national ultra-running team (24 hours, 100mi) soon? Are you in the focus of the coaches now?

Mark Perkins: „Whilst I’d obviously love to run for my country, really the only opportunities are at flat, looped road or track events which are not something that I’ve had any experience with so far. Maybe one day I will try and make the qualification standard but for now I think I will just concentrate on the more trail-based events and see how it goes."

UM: Your wife paced you - so is she a runner as well?

Mark Perkins: „Yes she is a very good ultrarunner as well (she recently came 2nd place in the National 100km championships) and was born and brought up in Berlin, so I had the added benefit of some local knowledge and support too!"

UM: You had only liquid nutrition in the last 60 km - was that ok for you? Perhaps you didn't have much of a choice...

Mark Perkins: „Yes, after about 90-100km my stomach was not feeling so great and so I switched to just drinking coke and water. I knew that I could run pretty far like this so whilst not really ideal it didn’t bother me too much, at least once I had gotten over the initial nausea."

UM: What was more annoying? The red lights which forced to stop your running or the fact that many refreshments stations where not open yet when you approached?

Mark Perkins: „Well the red lights were a little annoying, but everyone in the race has to deal with them so it is not such a problem. And actually there was only one aid station that was in the process of opening when I got there - after that the race organisation did a great job of getting them all sorted and it was all very smooth from there on."

UM: Prior to the race the whole attention was on the japanese runner Tsutomu Nagata. Did all the experts underestimate you?

Mark Perkins: „No, I don’t think anyone underestimated me. Tsutomu is obviously an excellent runner and I’m sure once he sorts out his nutrition issues he will be running some great 100 mile times. Prior to this race I’d only run one fast 100 mile time, and even I didn’t know if I could repeat that sort of result, so I don’t think that I was worthy of too much more attention leading up to the race."

UM: Did the British ultrarunning community follow your race in Berlin?

Mark Perkins: „Yes, some of the people I know from races and through social media sites like Twitter were following it. It’s always nice to finish a race and find out that people have been cheering you on!"

UM: Did British media cover your victory? Are you a famous runner in the UK now?

Mark Perkins: „No, I’m far from being a famous runner and have no problem with that at all! Actually we have a lot of talented ultrarunners coming out of the UK right now who i’m sure could run similar times. I think it will be exciting time for British ultrarunning over the next few years for sure.“

UM: Are you way better in really long runs like this than in marathons for example, i read that your personal best is "only" 2:53 hours!!

Mark Perkins: „Yes, I think that my strength definitely lies in the longer distances. I have yet to do anything longer than 100 miles - perhaps that will suit me even better - but I certainly feel more competitive the longer the race goes on. That being said, I’ve never run a fast flat marathon, and this is something I’d like to put some effort into training for at some point to see what time I could get down to. My 2:53 time was set on a very hilly trail course so I’m confident I could improve on that a fair bit if I had the chance.“

UM: What was the reason to start ultra-running?

Mark Perkins: „One day my wife and I decided that we wanted to run from our house to my parents house, across the South Downs, about 45 miles. No particular reason apart from that it sounded like a good challenge! It took us 2 years after we thought about it to actually get around to doing it, but it was great fun and after that we started looking for some longer races to enter."

UM: You label yourself as a "trailrunner with a passion for longer distances". Did you enjoy the flat course in Berlin or did you miss some hills?

Mark Perkins: „I love running in the hills and to be honest I’d generally prefer running over that sort of terrain to a flat race like Berlin. However a flat course obviously lends itself to fast times and I very much enjoyed the historical nature of the route on the day."

UM: Would you like to run a prestigious 100 miler in the USA, like Western States or Leadville Trail 100?

Mark Perkins: „Yes I would love to do a race like that one day. However with a full time job and two little children a trip like that is hard to find the money and time for! But one day hopefully I will make it out there for a race.

UM: How many weeks do you train specifically for such an event like the 100 miles?

Mark Perkins: „I don’t tend to think of it in terms of numbers of weeks as I feel like I am always training for something! I guess ideally I’d like to have about 2 months between any other event and a 100 mile race but obviously some of that time is used up with recovering and tapering for the event. "

Mark Perkins: „When training for a big event I generally aim to run about 120-150km a week if I can. I will typically do one speed session, one tempo session, one hill session and then often a couple of long runs, sometimes done as back to back sessions. The rest of my runs will be shorter easier ones, and I try and run twice a day two or three times a week. I also try and go to the gym once or twice a week when I can to do some strength and injury prevention work."

UM: What means running for you?

Mark Perkins: „At it’s best, it is a kind of meditation for me - a quiet time away from the noise and hecticness of real life. Not all sessions can feel this way but the occasional really special run make the hours of hard work all seem well worth it."

Thank you, Mark Perkins! We wish you good luck for the future! 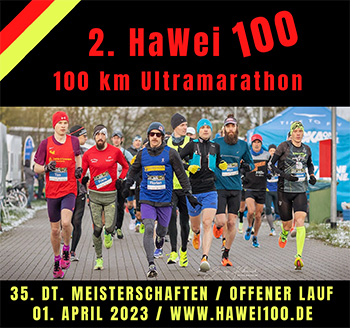 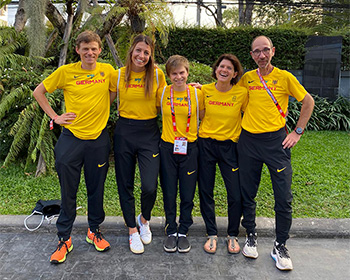 Wir fangen an,
wo Marathon aufhört!